Holiday season is upon us and I thought I would take a little break from the world of finance and economics to wander off into some interesting territories. I had bought this collection of Akira Kurosawa movies. Of this I finally got around to watching Rashomon. It is a great movie no doubt. Here's a humble attempt to analyse it.

The movie is narrated by a wood-cutter to a common man who has come to share a shelter named Rashomon during a heavy downpour. There is a priest as well. It transpires that the woodcutter and the priest had come to testify in a court for a crime of rape and murder by a bandit against a samurai and his wife. The woodcutter however recounts (from what he hears at the court as told by the witnesses) three different stories to the commoner - each of which are different in their reasons and details. These are accounts of the crime as told by the bandit, the wife and the samurai. The starting set-up, ending state and some of the major chunks of events are same in each story. The motives and specific actions by each of the three however are quite different.

Just as they are wondering which of the stories is correct, the woodcutter goes further to narrate his version of the story as well - supposedly the closest to the truth. As it turns out, the best availble version of the 'truth' has its own flaws as well. The commoner represents the utterly cynical worldview while the priest stands for the idealist variant. The woodcutter seems quite disturbed by his observation of the limitations of human nature.

The central theme of the movie is quite disturbingly accurate of the limits of the truth available to human beings. For one, it focuses on how truth gets deformed by the individual agendas and aspirations the observer has. This is shown through the three stories of the bandit, the samurai and the wife. Secondly the movie goes into the more disturbing exploration of whether there is any absolute truth whatsoever which is without any coloring by the observer. This is brought out in the slightly distorted version of the events produced by a supposedly unbiased woodcutter. One is almost tempted to revisit the principle of quantum mechanics that the observer invariably influences the observed and thus can never provide the accurate description of "things as they are". Rashomon seems to bring out a similar intertwining of the observer and observed in the moral plane.
Posted by Swapnil Pawar at 12:18 AM No comments:

Several observers have expressed concern about India's rising current account deficit. In recent months, the deficit has indeed been on rise. 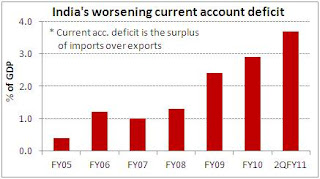 However, contrary to popular perception this need not cause the same degree of alarm it used to say 10 years ago.

In general a widening current account deficit is a negative. In India’s case however, it is almost acting as the counterweight to the hot money flows and is helping RBI avoid the nasty problem of either letting the currency appreciate (if it does not intervene by buying dollars) or increasing the money supply (it if does intervene). Contrary to a widely held belief, the hot money flows are not only equity markets driven. A good portion of this is also invested in debt in India and that is primarily driven by the differential in interest rates across developed economies and India. Since that is likely to last for a while owing to quantitative easing by the Fed, I would think the hot money flows are unlikely to abate in a significant way in the near future.
Structurally of course it is dangerous to have this fragile equilibrium for long. Hopefully some pick up in global economy would support exports growth from India and reduce the deficit. On the other hand, one can hope that the break up of the capital inflows moves towards more stable FDI. In fact, in one of the recent articles, The Economist highlights the so called 'Delhi Consesus' which in essence is about letting the capital inflows happen as a positive and much needed outcome of superior economic growth in emerging economies vis-a-vis developed ones. Following is an interesting graph from that article.

Even portfolio investments are made out to be much more volatile, bigger and potent villains than they really are. In a country like India sitting on over $280bn of forex reserves, a capital flight out of India of hot money can hardly bring about macroeconomic instability.
Posted by Swapnil Pawar at 9:38 AM No comments: